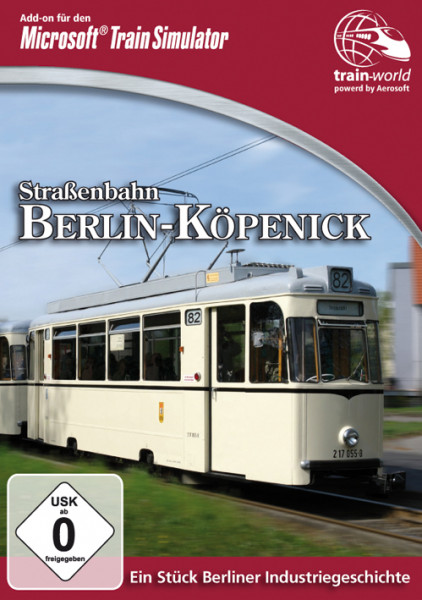 This product is currently not available.

Description System requirements Videos
Description
The time is 1970 and the place is Berlin and up until now no one has been able to document this... more
Close menu
Product information "Straßenbahn Berlin Köpenick"

The time is 1970 and the place is Berlin and up until now no one has been able to document this so effectively as we have in this simulation. Therefore we are proud to say that this is a rather special product.
In the 1970s the Berlin-Köpenick tramlines had the particular task of transporting workers from the residential areas of Köpenick to the industrial areas of Oberschöneweide along the Wilhelminenhofstraße, where around 25,000 people were employed.
These trams were literally filled to bursting point when the shift changes started in the state owned enterprises (VEB) such as the VEB Kabelwerk Oberspree, VEB Werk für Fernsehelektronik, VEB Batterie- und Elementefabrik (BAE), VEB Transformatorenwerk Oberspree and the VEB Berliner Metallhütten- und Halbzeugwerke BMHW. During peak times up to 7 services were continually running from Köpenick to Oberschöneweide. Increasing the frequency was the only way to effectively get the workers to and from their work places.
But it wasn’t just the trams as there were also public facilities such as day nurseries, nursery schools as well as other cultural institutions situated along the line so, in many ways it can be said that the trams became an integral part of everybody’s life.
A further distinctive feature in Schöneweide was the works railway which had been operated by the Berliner Verkehrsbetriebe (BVB) since 1903 in order to connect the factories with the marshalling yards in Rummelsburg. The local residents named this tramline irreverently but nonetheless affectionately „Bullen“ (Bulls) on account of the robust looking electric locomotives.
All that has now become a part of history and large industry with names like KWO, KWK, ORWO, TRO, Siemens, AEG, Niles, WF, BMHW and more recently Orenstein and Koppel who are well know manuf¬actures if locomotives have all long since moved away from Berlin. However life goes on and in the mean time the buildings have been assigned to other functions.
A feeling for this long gone era however can still be sensed if you go there. An „Insider“ going into the Köpenick Forum will still meet many of those who once lived and worked in the municipality of Köpenick, and Köpenick does have its attractions boasting the largest water and woodlands areas in Berlin. Now, of course the mood has changed and is different to that in the other centres– here you’ll meet people, who have spent their whole lives living and working here and there is still a rather special bond amongst these people .
The staff of the tram service actually knew many of their passengers personally und I myself can remember as a child exchanging a few nice words with the lady conductors and even being given sweets while travelling on my „favourite“ 82, 83 and 86 services. This was quite simply an expression of the friendliness that was experienced by all people.
Anyway, enough said and it was not my intention to completely immerse myself in times gone by but, a little „nostalgia“ is never a bad thing although this is not something that goes without saying in our “former capital”. I hope I have succeeded with made my little contri¬bution to reawakening a small part of Berlin’s past industrial history.
Finally I’d just like to point out that this work is based on my own personal experience so it’s therefore fair to say that I am writing about and reliving a part of my own history as well.

Attention: this addon is currently not distributed by TrainTeamBerlin. Please order the addon from the publisher Aerosoft or from the relevant spezialized trade.