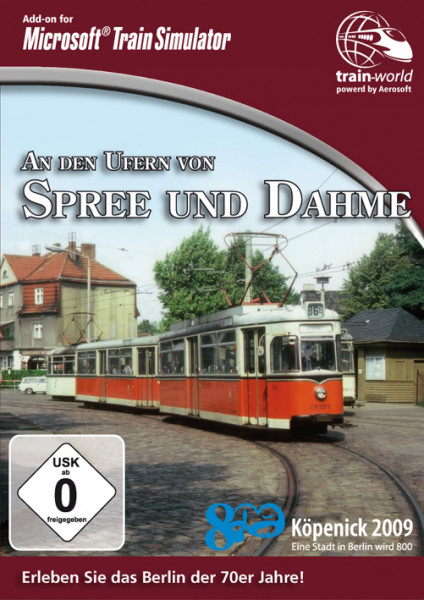 This product is currently not available.

Spree an Dahme are two rivers, which flow together in the middle of Köpenick, located in the southeast quarter of Berlin. These two rivers are inextricably associated with the origin from the city of Köpenick. Fishery and later on laundry became the most important economic sector of Köpenick. Two fishes have also been integrated into the city coat of arms, als well as the Saint Peters key, which symbolises Peter as the patron saint of the fishermen.
This year Köpenick becomes 800 years old and therewith older than Berlin (747 years). The foundation goes back to the slavish prince Jacza de Copnik, the name of the place to the slavish „ta copan“ - island place – which excactly describes the geographical position of the location center, which is todays historic city.
The amalgamation with the city of Berlin on October 1st 1920, the real Köpenicker and Spandauer, located on the opposite site of Berlin, never really got over and have kept their identity over the past 90 years. So this year Köpenick proudly celebrates a decadal birthday.
At the beginning of th 20th century in Oberschöneweide, a later district of Köpenick, industrial settlement took place. The Niles AG, Siemens and others not build up their factories, but a complete urban district as well. Apartments for the workers, schools, public facilities originated as well. For the transport of goods and freight the railway had been used. The industrial railway, which initially connected the factories with the freight depot Niederschöneweide, obtained a route in the twenties to Rummelsburg and the freight depot located there.
The developmet of large firms settled in Köpenick – for example Agfa-Film company or cable manufacturing plant Köpenick- also caused the development of new housing areas in the north of Köpenick, later also in the districts of Kietzer and Amtsfeld.But Köpenick not only offered employment and tenements, vast forests and the lakes of the Spree and Havel offererd various opportu¬nities for relaxation.
This trend needed a transportation, which could effectively bring people to work, back home and at the weekends to relaxation. Since 1882 the city of Köpenick owened a horse tramway, which soon after the turn of the century in 1903 submitted the traffic to the „Electri¬fied“. These operated the as the first line on the route between railway station Köpenick and Marienstraße (Wendenschloß). On June 11th 1909 the route to the raileay station Grünau was opened.
The aera in which our add-on plays – the seventies of the past century - was characterized by extensive tramway traffic in the borough of Köpenick. At this time there were 12 tramways routes and only two bus routes driving across the borough. Aditionally the Berlin traffic enterpri¬ses were running the industrial railway mentioned above. There was a lot going on upon Köpenick´s railways. For the commuter traffic there were up to eight routes operating on the main line between Oberschöne¬weide and Köpenick. If there was a shift change, this amount of routes was already too little, trains were mostly jam packed.
Today this scenery has changed. The tramway is still serving railway network,the amount of routes had been reduced. After the omission of the large firms, there are only three routes operating demand actuated on the former main line. Whereas the amount of bus routes has been enhanced, Today there are five bus routes running on Köpenick´s streets. The traffic at night, usually covered by three tramway routes, is now running by busses only.
Unfortunately there are always specualtions about closure of tramway routes, although – considering the costs for train paths – the tramway is the more economic transportation. And so even the „most beautiful tramway route of the world“, the Uferbahn, which was founded in 1901 between the small village Schmöckwitz and the railway station Grünau, is threatened by closure.
The route runs in the southern district through the Berlin city forest along the long lake. This route is the main actor in this add-on, even though the part towards Ostkreuz via Oberschöneweide, Karlshorst, Rummelsburg from the add-on „Straßenbahn Berlin-Köpenick“ had been corrected, enhanced and been included as well. Come along on a journey which begins in the suburb of Köpenick. Get into the position of the tramway driver along the streets of Köpenick.

Attention: this addon is currently not distributed by TrainTeamBerlin. Please order the addon from the publisher Aerosoft or from the relevant spezialized trade.