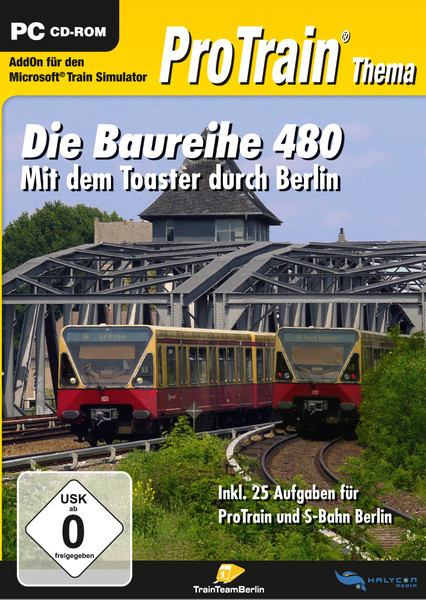 It was a media event when the came onto the tracks in 1986. One reached optimal running chracteristics through use of latest technology, but this train set an optical course, too. But the Berliners enforced the operator to paint the veheicles in traditional Berlin S-Bahn colors.

We concentrate on both type series of the Class 480 in this addon as they were in daily operation in 2009. We pass on using thinned out "emergency schedules" and show the Berlin S-Bahn the way, as most of the Berliner remember it: as a reliable means of transport that carries thousands and thousands of people through the capital with close-meshed synchronized timetables day by day. The highlight of the addon is the implementation of the prototype of the Class 480 in state of its first permit and test runs.

We bring the vehicles into play by delivering first class activities as usual:

Attention: this addon is currently not distributed by TrainTeamBerlin. Please order the addon from the publisher Halycon Media or from the relevant spezialized trade.